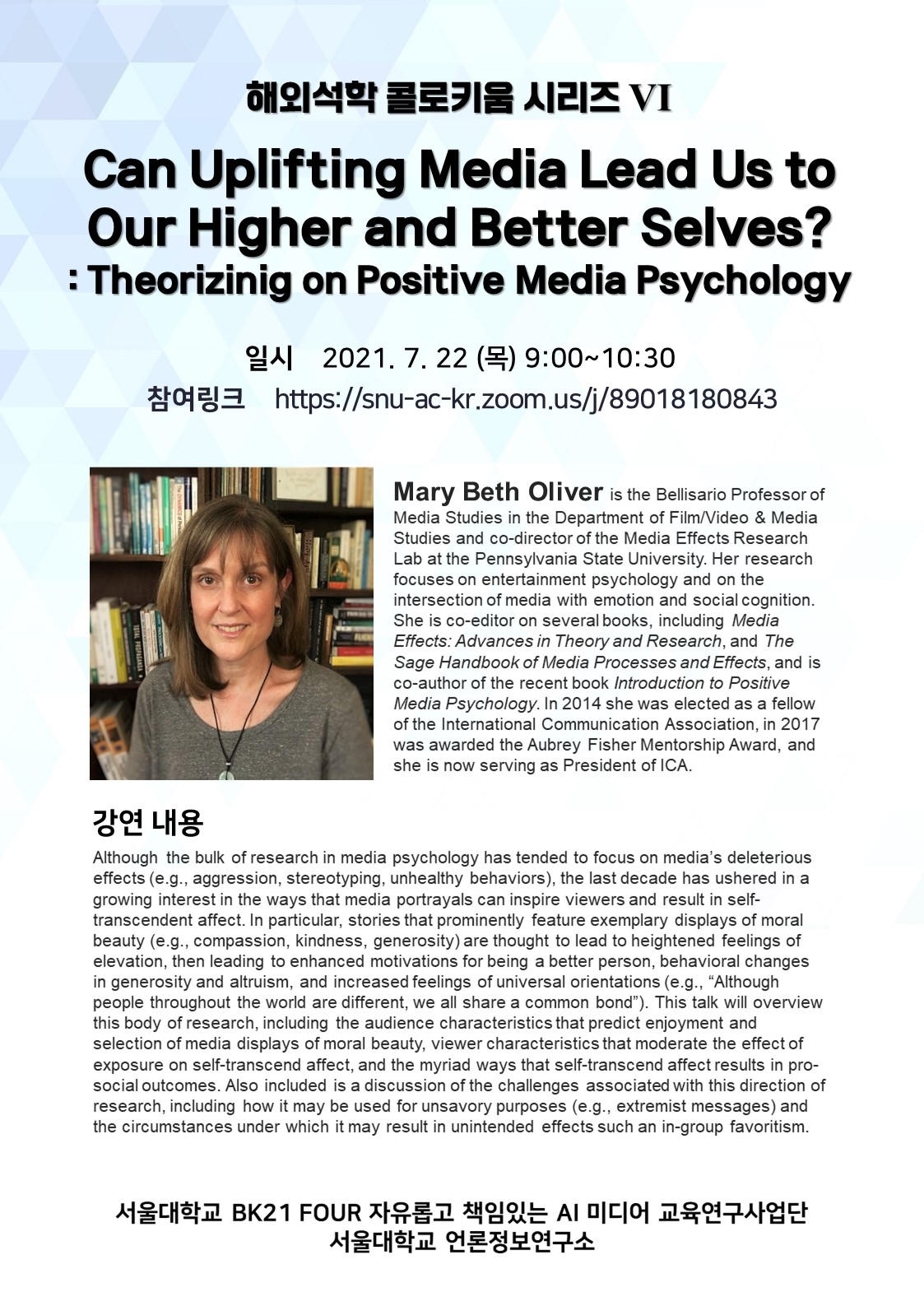 ● 주제: Can Uplifting Media Lead us to Our Higher and Better Selves? Theorizing Positive Media Psychology

● 초록: Although the bulk of research in media psychology has tended to focus media’s deleterious effects (e.g., aggression, stereotyping, unhealthy behaviors), the last decade has ushered in a growing interest in the ways that media portrayals can inspire viewers and result in self-transcendent affect. In particular, stories that prominently feature exemplary displays of moral beauty (e.g., compassion, kindness, generosity) are thought to lead to heightened feelings of elevation, then leading to enhanced motivations for being a better person, behavioral changes in generosity and altruism, and increased feelings of universal orientations (e.g., “Although people throughout the world are different, we all share a common bond). This talk will overview this body of research, including the audience characteristics that predict enjoyment and selection of media displays of moral beauty, viewer characteristics that moderate the effect of exposure self-transcend affect, and the myriad ways that self-transcend affect results in pro-social outcomes. Also included is a discussion of the challenges associated with this direction of research, including how it may be used for unsavory purposes (e.g., extremist messages) and the circumstances under which it may result in unintended effects such an in-group favoritism.

● 연사 소개: Mary Beth Oliver is the Bellisario Professor of Media Studies in the Department of Film/Video & Media Studies and co-director of the Media Effects Research Lab at the Pennsylvania State University. Her research focuses entertainment psychology and the intersection of media with emotion and social cognition. She is co-editor several books, including “Media Effects: Advances in Theory and Research,” and “The Sage Handbook of Media Processes and Effects,” and is co-author of the recent book “Introduction to Positive Media Psychology.” In 2014 she was elected as a fellow of the International Communication Association, in 2017 was awarded the Aubrey Fisher Mentorship Award, and she is now serving as President of ICA.